I first wrote “ER” back in 1974 as a record of my experiences as a medical student in a hospital emergency room. But it was not until the fall of 1994, 20 years later, that these stories appeared as a new television series. That must surely be the longest creative gestation in modern television, but it was worth it. Audiences found the show to be fast-paced, fresh and real, and it drew a loyal following from its very first episode. But if the past was remarkable, the future was even more so: none of us involved in those early days of “ER” could have anticipated its long and remarkable run as one of the best and most popular television shows in the history of the medium. From its early days to the exciting present, it’s been one long thrill for me, and I think for audiences as well. Enjoy! – Michael Crichton.
Closed Captions and Details
Audio Language Options: English
Subtitle Options: French
Format: Anamorphic Widescreen (No black bars on the top or bottom)
Region Code: Region 1 (Plays in the USA and Canada)
Disc Format: Regular DVD
Condition: Brand New and Sealed
er cds er complete dvd er complete series dvd er dvd box set complete series er movie dvd er series er the complete series complete series of er the tv show er dvd complete box set tv series of er 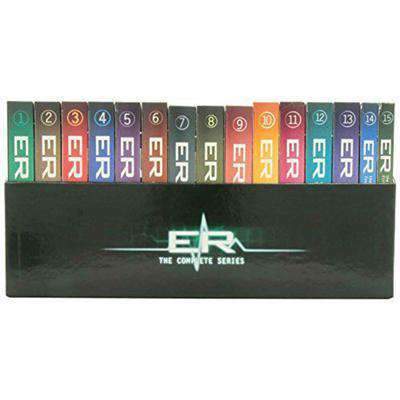