Includes every episode from the entire TV series!

Jake is a 30-year-old man living with his father Malachy because his ex-wife Nikki kicked him out. A former cop, he works as a private investigator with his father, Mal, and his father’s wife, Rose. He is over-protective of his 16-year-old niece, Republic of Doyle The Complete Series DVD Tinny. He is the second son and youngest child of Mal Doyle and his late wife Emily Ann. He drives a 1968 Pontiac GTO and wears a black leather jacket, both of which figure prominently and iconically throughout the series. After years of pursuit, in Season Four he and Leslie Bennett become a couple. He also discovers in Season Five that he has a sixteen-year-old daughter, Sloan. Near the end of the series Sloan reveals to Jake that it was all a scam and she forged the DNA test and isn’t actually Jakes daughter. In the series finale Leslie reveals to Jake that she is pregnant and after being shot by Inspector Pickard and she is in the hospital it is revealed to Jake that she is going to have twins.
Closed Captions and Details
Audio Language Options: English
Subtitle Options:
Format:
Region Code: Region 1 (Plays in the USA and Canada)
Disc Format: Regular DVD
Condition: Brand New and Sealed 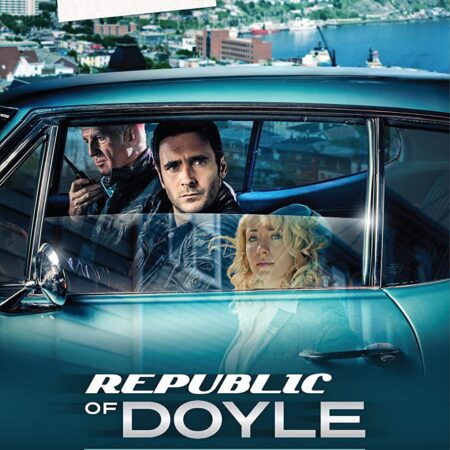